I do not know how to start this post, at the same time as I want you to know and understand why there will be a bit of a bad update here in the near future ♥

Last Thursday I had the worst night of my life. My mother has for several years struggled with anxiety and depression, it has been so incredibly tough for all of us children and grandchildren but we have always cared and been close. She has been on sick leave for a whole year now and Miska and I have more or less lived here with her since then.

Mom has had a better period for almost 3 months now, when she had a setback on Tuesday. That night Miska and I slept there as usual, and in the morning she seemed happy and like herself. The last thing I told her before we went to work was that we were so hot at night that I woke up and put the mosquito net in the window. The mosquito net that my mother made herself from a wooden frame and beer advertisement from Spendrups, which you are so used to seeing that you do not even reflect on the fact that everyone who passes by sees a large red villa with flowers and a flowering garden - and a large beer- picture in the window. No wonder you take what you have. I did not know if I had attached the mosquito net correctly and I told her to take a look at it later so that it does not blow away or reach "jaa you should not have to have any spiders in the room when you get homeShe replied. And that was the last thing she said to me.

The night after we slept in Uppsala.

But on the Thursday after work, Miska and I went home with a pizza so that my mother would have something to eat. But it was too late. Mother's body could no longer fight. Finding her is a memory image and a shock that will never disappear from my retina. 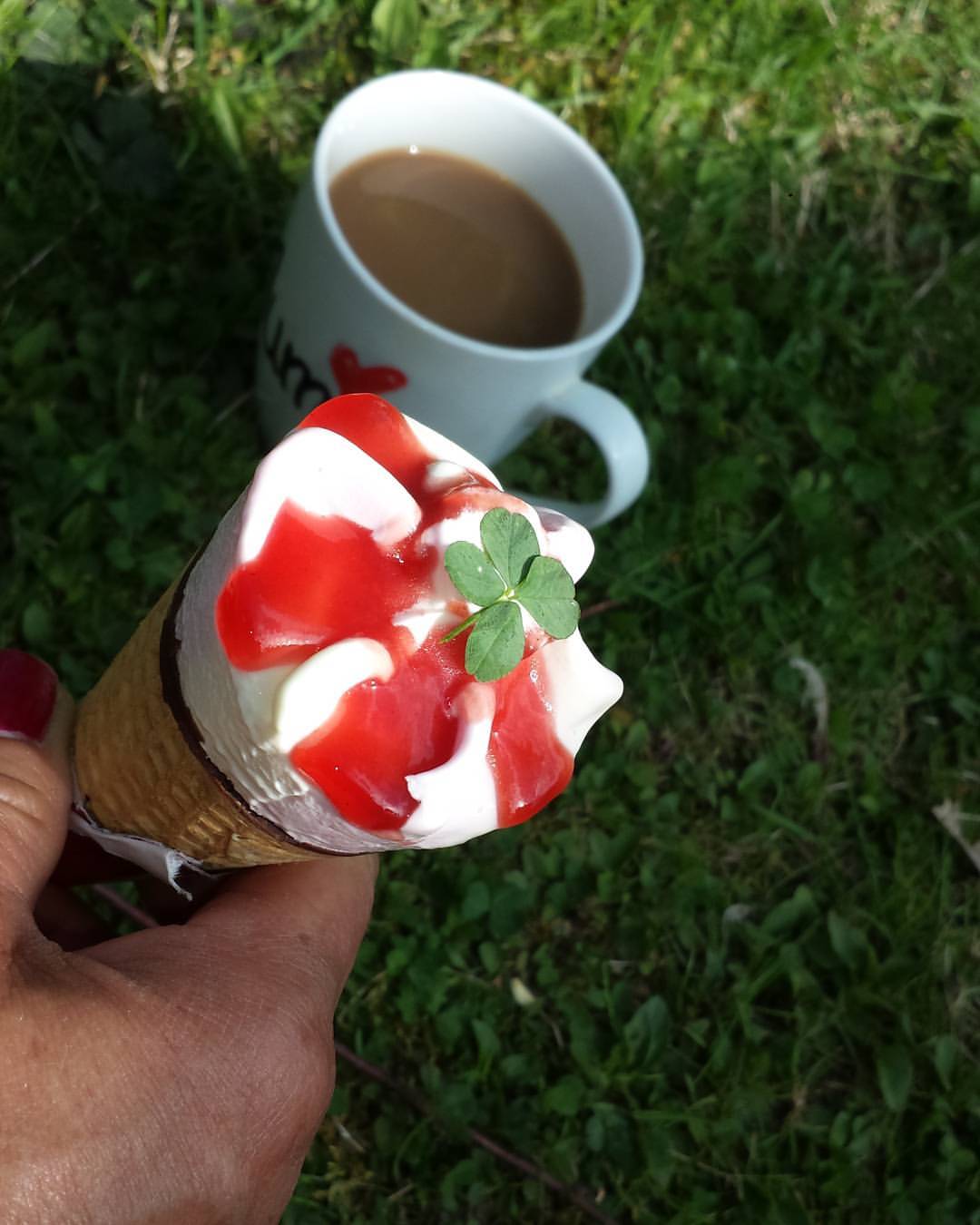 Here is a picture from one of my mother's last days in life, the whole picture screams mother ♥ The Moomin cup she received as a gift and always drank from, the ice cream she bought several cartons of because it was so good AND cheap, only 22.90 for six pieces, we teased (heartily) with her so much because she talked in such detail about those ice creams. And we got to eat as many as we wanted. And a four-leaf clover, mother always looked for four-leaf clover - and found! She kept the count and found so extremely many just this summer, one day there were 35! She has probably found over 100 in total just this summer, and another barely found a single one when they tried.

I miss her so much… I have not left the house since we came here, trying to process everything, and just about every thing reminds me of mom. Half a can of beer in the cellar, the soap that soon ran out and that she filled with so much water to get the last out that it is kind of water with the smell of soap, which I pecked at her last weekend ”a little water is enough to get the last one out, you do not have to fill up half the bottle and wash your hands with scented water for a month”. Her unwashed Moomin cup on the sink, the breathing medicine next to her computer in the living room, the reading glasses next to the stove, all her flowers and plants that she has grown so much that they soon spill out of the pots, her (and mine and Miska's) freshly washed clothes that she hung to dry, the mosquito net in my room ..

And so many memories.

We are a big family and I am so lucky to have so many around me who care, we cry together, talk about memories and joke about my mother's all the nonsense and what she would say if she saw us now. I was incredibly close to my mother and it is impossible to describe the pain in my chest that I have now, but I know that she is better now. She has fought so much for so long ♥

Mom has been writing diaries and notes for the past year that I am going through now to get even more understanding, very hard at the same time as it feels so nice to be able to share her own thoughts. Everything from the pride of days she has managed to fight and feel happy, about the care that disappoints her time and time again and about all the time we have been there "Helena and Miska have made taco gratin" "Told Helena about… .." and how grateful she is been beyond our patience.

It has been nice to be able to write a little, and above all nice that you know now. It was so hard to sit there on the balcony floor, when Miska just called 112 and explained that it had been so long that there was nothing to do, and knew that No another knows yet. But now most people know, even you, and it feels very nice.

We'll see when we hear again.

Thank you for all of you ♥