Writer, Helena Amiley
0
296
Facebook
Twitter
Pinterest
Email
Print
- Advertisement -
I have written about complexes before and now it's time again.
I had very low self-esteem before. However, it was quite a long time ago, so I have had time to work away most of it.
It started in the very beginning early age. My first strong memory was when I was 11 years. I was on my way home from school and a bunch of girls walked behind me shouting that I was fat (which I was not at the time either)
I came home, cried alone in my room and then did not want to have dinner, 11 years ( ! ) Then it continued with another girl gang, and even though I ignored them, it still took on the psyche.
What I did most was that fake self-confidence. I could stand in front of the mirror and say ”today I look really good! ” even though I did not like them (However, one must be careful so that others do not take it badly. The compliment should only have to do with yourself, and not imply that you are better than anyone else.)
The dentist told me I needed braces for mine "Fangs". I refused, which was a lot because of my insecurity. And many times I have regretted it when I felt ugly in my teeth.

I have also had a big problem with mine nose which has a "drop-shaped" tip. Have sat for many hours and tried to push it in, and planned surgery in the future.

But I do not care at all about those things anymore. You have to fight to reach that point with your complexes, but once you are there, it's so worth it! 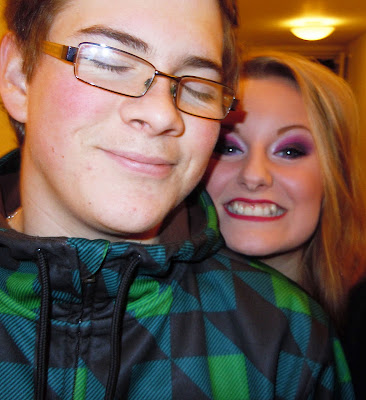 Me and Calle :)
Before, I had only seen my nose and my teeth in the picture above.
What I see now is a very happy girl!
- Advertisement -
Share
Facebook
Twitter
Pinterest
Email
Print
Previous articleTowards Borås!
Next articleReady