When we planned the move, I thought “we move the last on January 1 and then we work from home for 2 weeks and wait for Annika's birth”.

It was not that simple in practice;) This week has also been intense and we have done a lot! 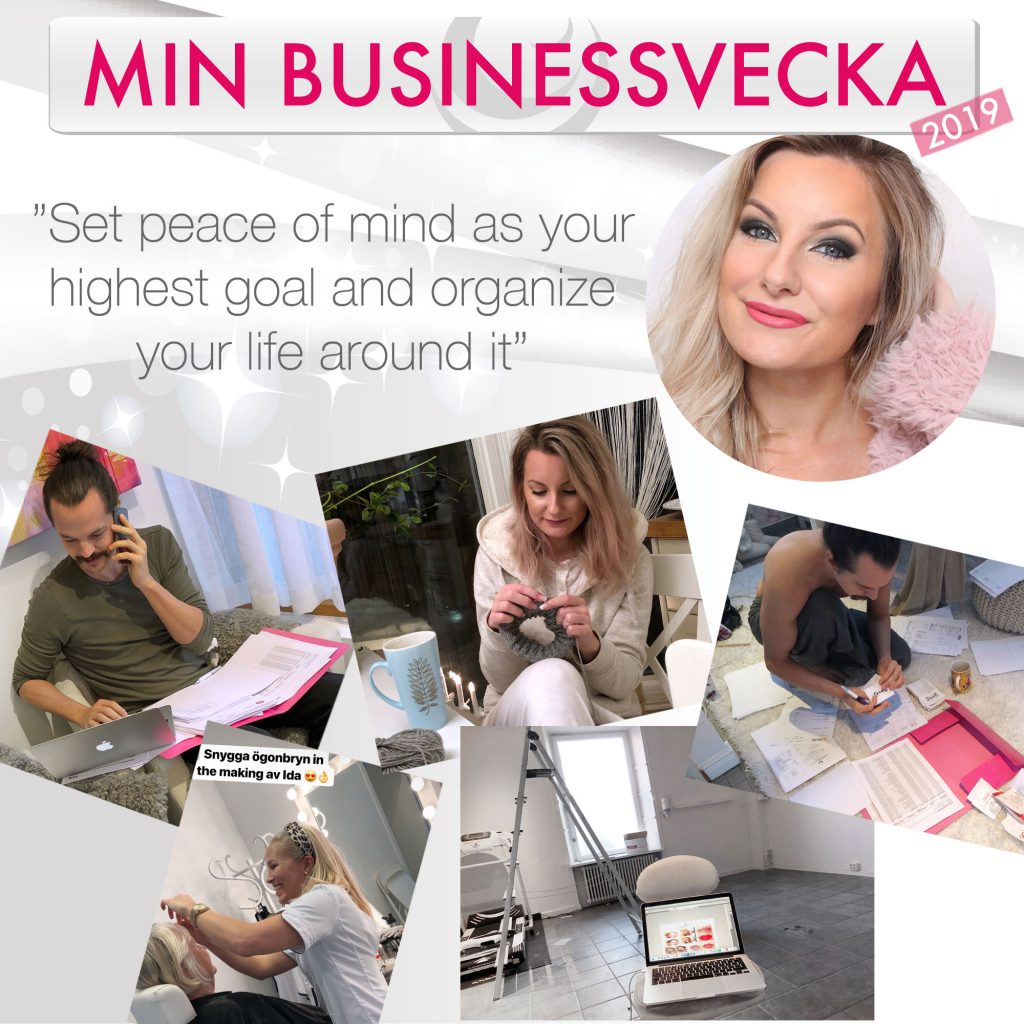 Varied salon job
We have gone into town every other day and taken the opportunity to work when Annika and Miska have still had booked training. Annika is the kind of fighter who had booked her last PT training session on the 11th, even though she was scheduled for the 10th haha.

We have had the environmental inspectorate on site who approved our new premises, order and routines. This is a must when performing permanent makeup tattoos to ensure a sterile treatment. Everything from air flow in the room to things like how we store cleaning materials, the proximity to sinks, protective plastics that are exchanged between each customer and very more.

We also drilled up some stuff when dad was kind and lent his percussion drill! He's a carpenter with good stuff, so it was like night and day on the drill we had. Then when Miska drilled in one wall, all the power went (!!!) he has probably drilled in an electric cable. How do you know where seventeen are in the wall? So we have had an electrician on site to pull the cables (it was not urgent, however, because we started the power via the plug cabinet, but for safety's sake, you have to pull the cables anyway).

The electrician also set up our large lamps over each treatment bed so that we have spotless light everywhere, so good !! We have never had such good light as in this new salon! 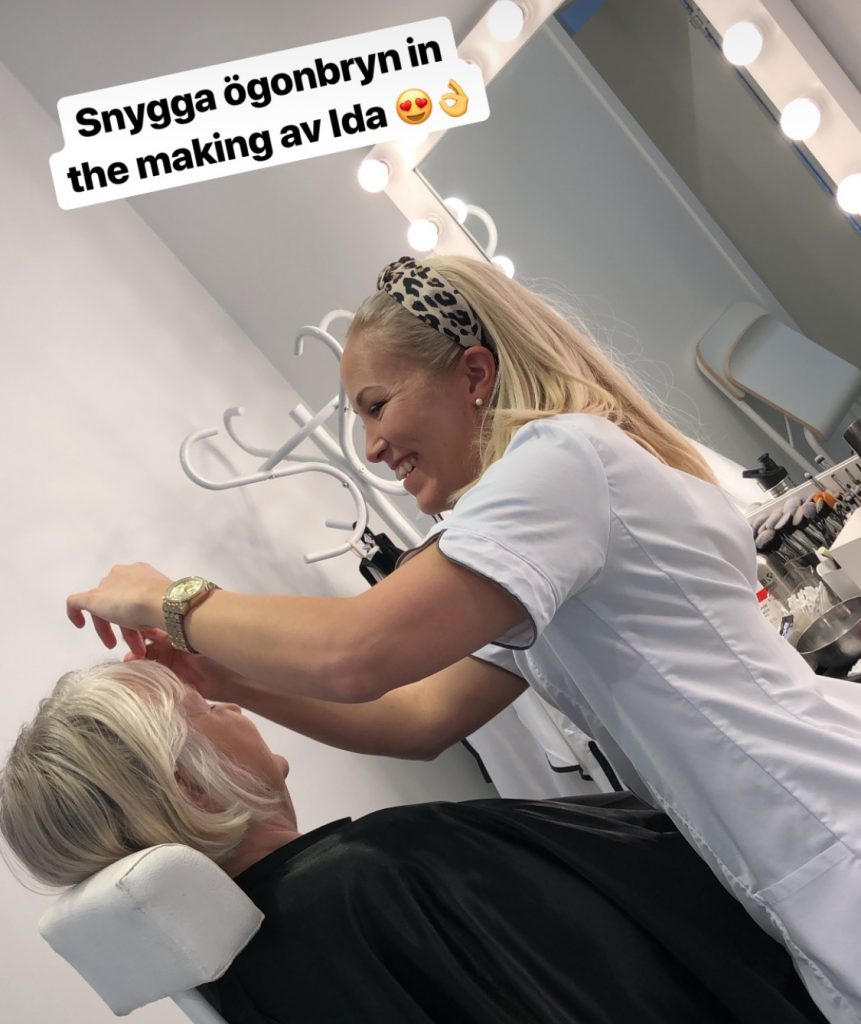 Luckily, we have such talented colleagues who hold the positions while we run around like dizzy chickens :)

January is a low month when it comes to bookings and now that we have increased everyone's services, there will be a lot of gaps in the schedule, which stresses me enormously. But if the company has survived this long, it should not collapse now either haha. 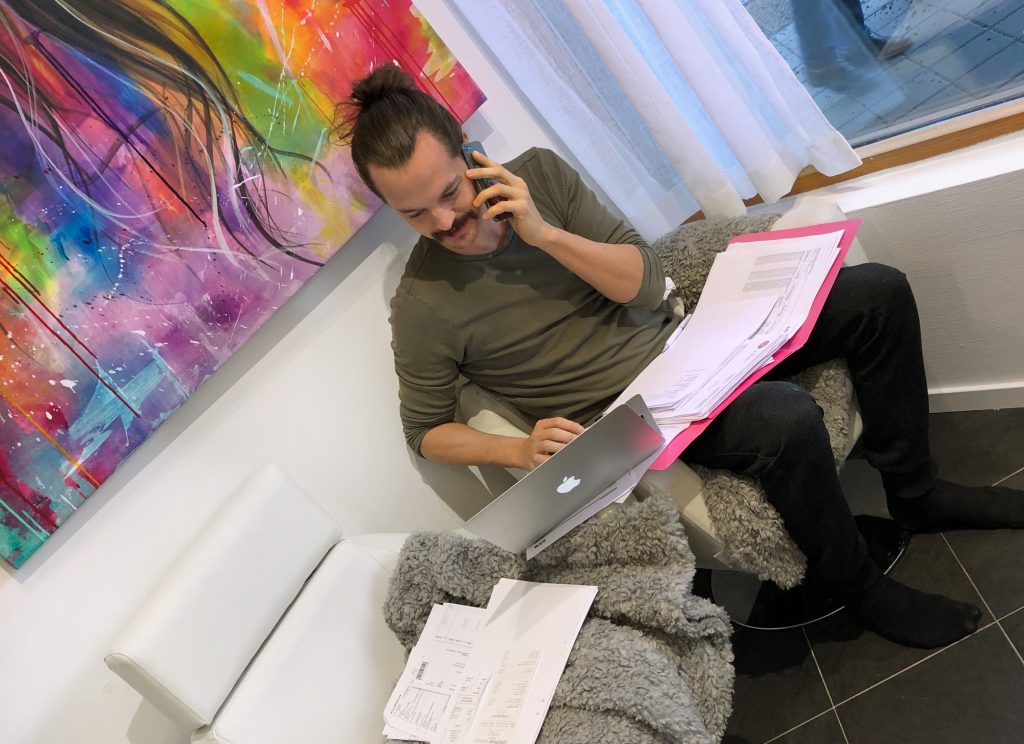 We also have a lot of paperwork, here Miska is talking to the insurance company regarding our broken shop window that I showed you in last Sunday post.

And a large part of the week has been spent at the old salon where we cleaned, cleaned and cleaned! We have had more stuff sold as well, all the money is important now that we are still sitting with double rents, but above all we feel that it is worthwhile to get help to get rid of things. We get paid to avoid going to the dump haha. 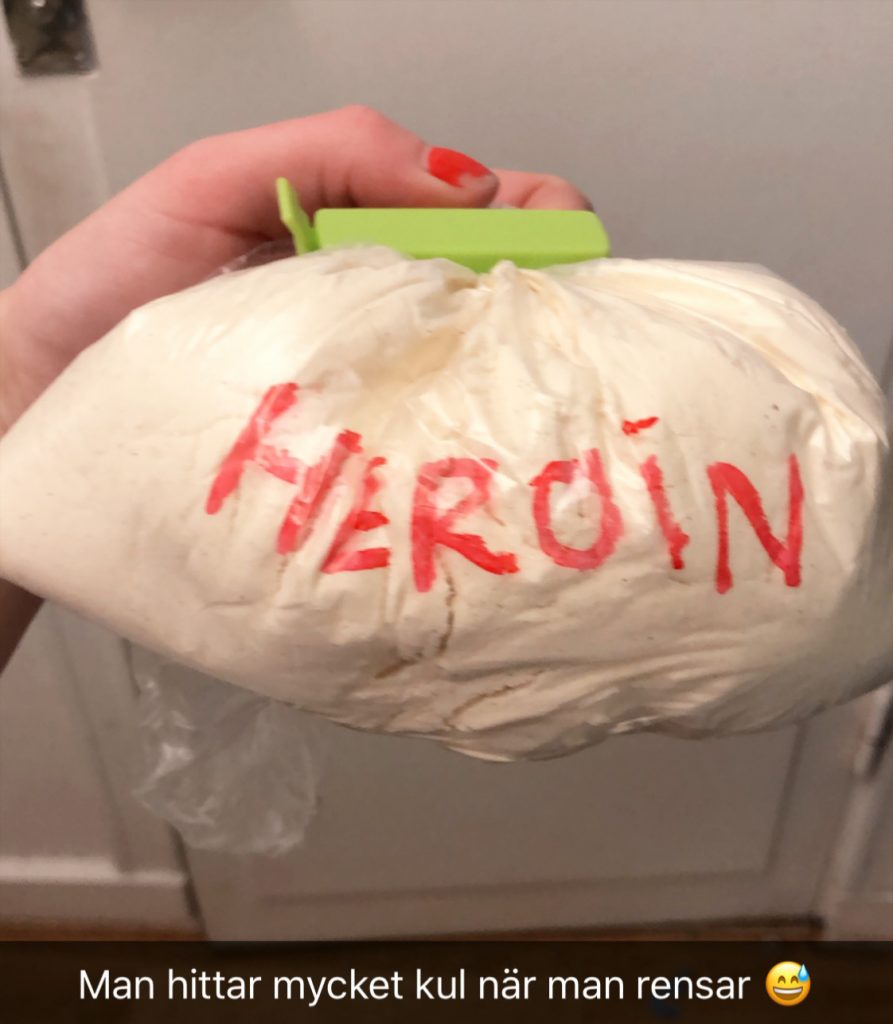 There's a lot to throw away too, I really do not understand where all the rubbish comes from and why it has been saved so extremely much useless stuff! This is how it is when you have a large area and a lot of storage. This bully bag has been in the kitchen for so long that I do not even remember what it really contains or who it is from the beginning haha. 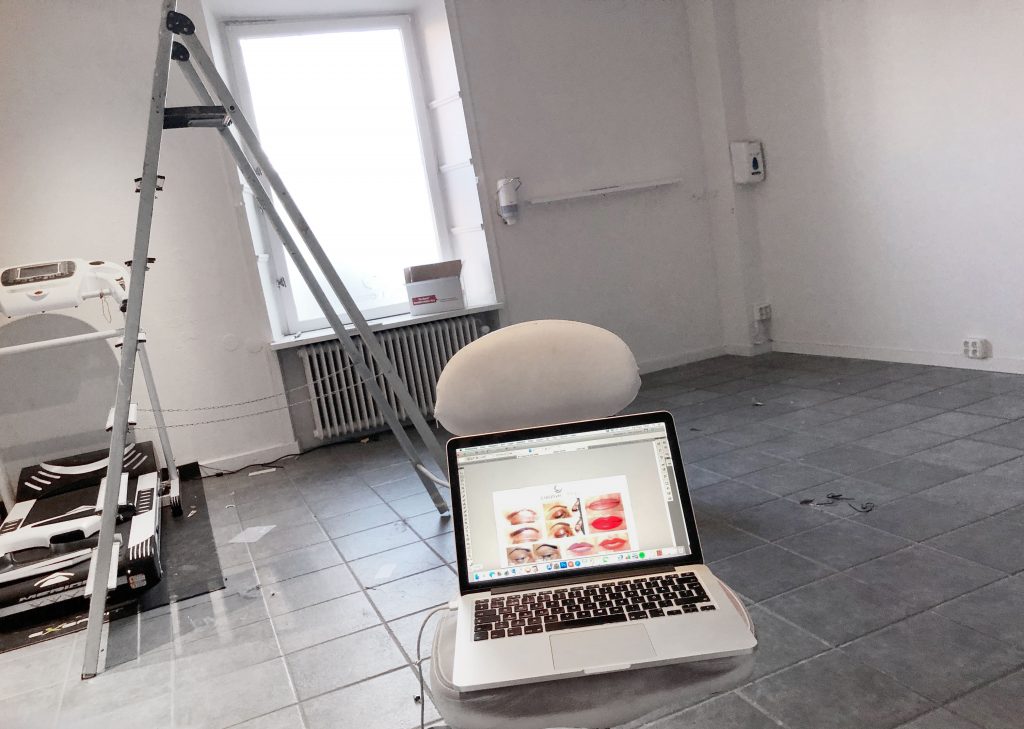 The store is filled with gadgets that can be sold and we have a large area full of things to throw away. But the treatment rooms are starting to echo empty! Here I sat and fixed with some pictures quickly before I went to the new salon and changed pictures in one of our screens.

No one wants to buy Annika's treadmill as you see in the background? :)

… And a lot of homework!
When I do a lot of practical work that is not part of the regular schedule, I slip behind and get a lot of work to catch up with when I'm home instead.

I worked at home on Tuesday and Thursday and although I sat from morning to night and got a lot done, I said in the evening "dit does not feel like I have done so much today even though I have worked constantly, because there are so many points left on my to-do list”. But it's about me having too many items on the to-do list to complete in one day, not that I have not been effective.

Among other things, I have updated our browser we have at the salon. It is a large screen with touch buttons that you can use when talking about different treatments to customers. 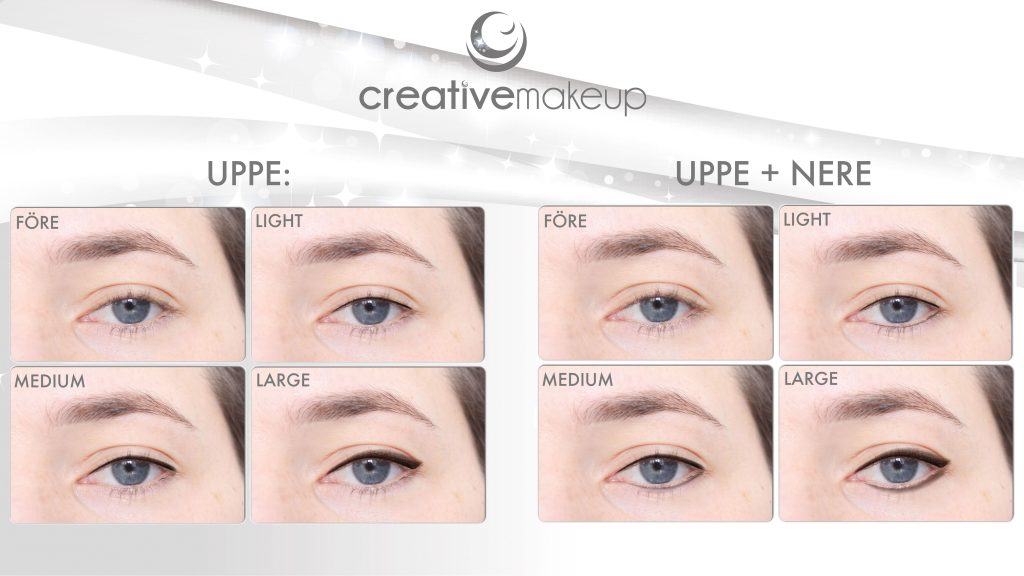 For example. this where you can clearly describe the difference between our different eyeliner sizes.

We have removed the previous eyeliner variant "lashliner" because Eyeliner Light is also a type of lashliner but not as thin, so customers had a bit of a hard time understanding the difference. And as soon as you change a treatment, you need to change the display images, info on the website, everyone's price lists and change in the booking system. So for a small change, there are many steps! 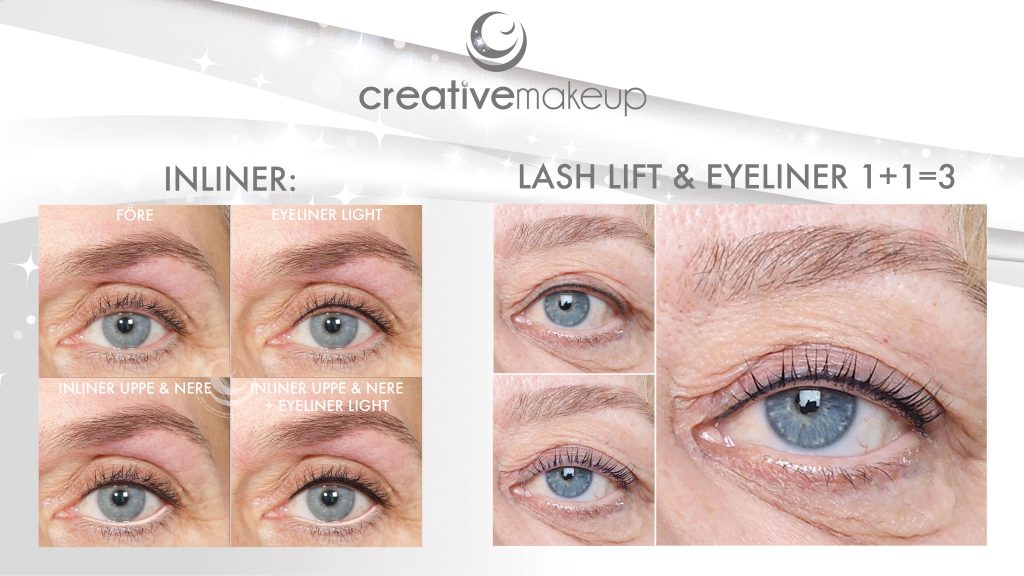 We use these images to describe how you can complement your eyeliner with inliner and / or lash lift (eyelash permanent. These images are also edited to some extent. Everyone in the left image is edited and in the right image only the bottom image which is edited.

But the biggest job is that I have cleared a lot on the website. I started already last week but there was a lot left. On the one hand, I have changed the information about apprenticeship treatments as Olga has now gone up to the level "Apprentice Step 3", which means that she is self-employed but still counts as an apprentice until she has worked up more treatment hours. Then there is a lot of info to be updated, opening hours, address, payment method (we have stopped with cash and Payex but started with Klarna) and about us pages.

Many treatments and products disappeared from the range in connection with the move (eg beard products, toothpastes, Hairology) so now I did a major cleansing in menus and categories as well. It sounds simple but is a time consuming process for various reasons!

So now there are fewer categories and more stylish when you browse the webshop :) We also had some outgoing products on sale that we removed completely now when we were still working, e.g. nail polish, konjac sponge sponges etc. Things that we sold a lot of before but which have decreased so much that it does not feel worth stocking anymore.

I have quite a lot left to fix on the website, new pictures, etc., but all urgent info is fixed now in any case. So nice :) 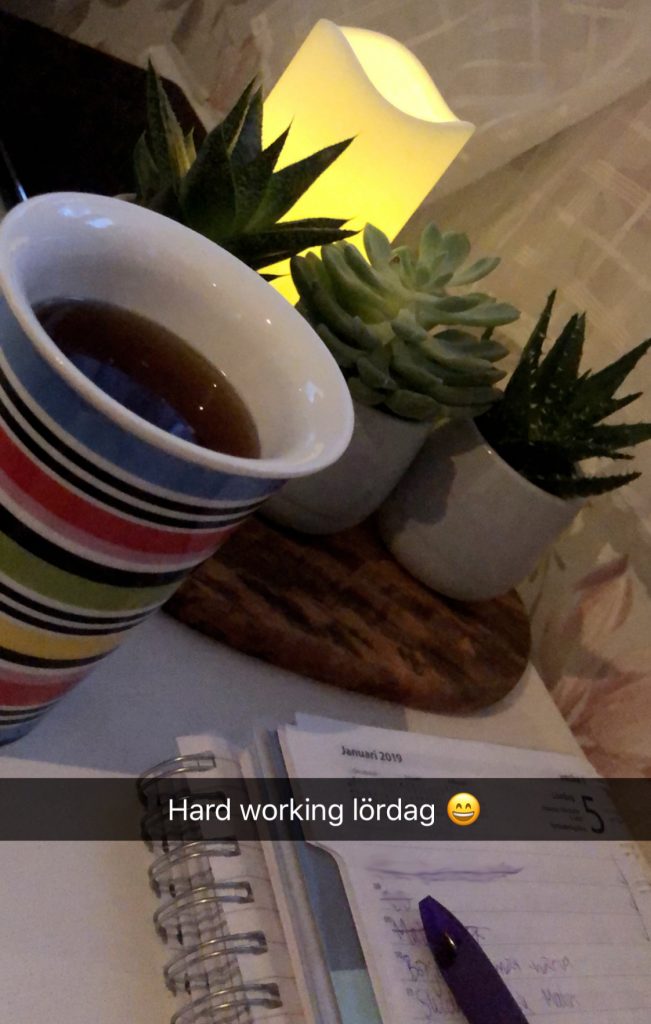 There will be many evenings and weekends in front of the computer! 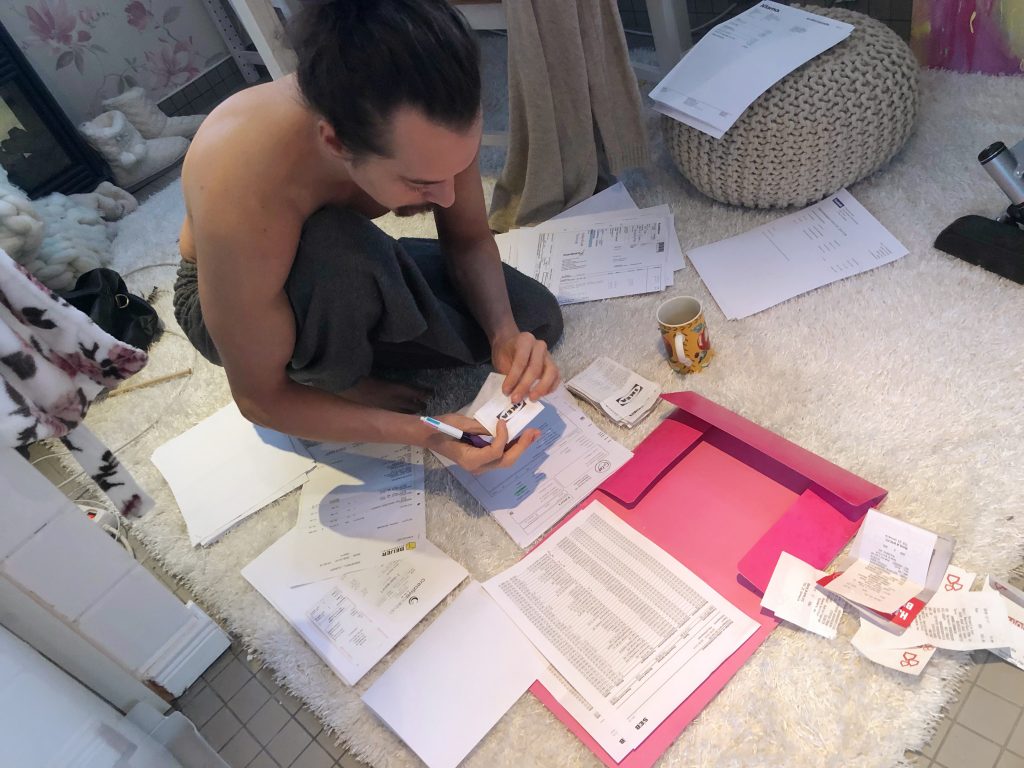 Hip-entrepreneur who no longer has an office but fixes accounting documents at home on the carpet in a bare torso and a pouf as a shelf;) ♥

Relaxation & health
An important detail for 2019 is to get rid of my health. I started to feel feverish last weekend (after six months of problems regularly, you learn to recognize immediately when it's going on) but I managed to counteract it this week with Coldzyme spray (can recommend!) And the dietary supplement L-Lysine which is an amino acid. It worked!!

In addition, I have started to unwind mentally by knitting! 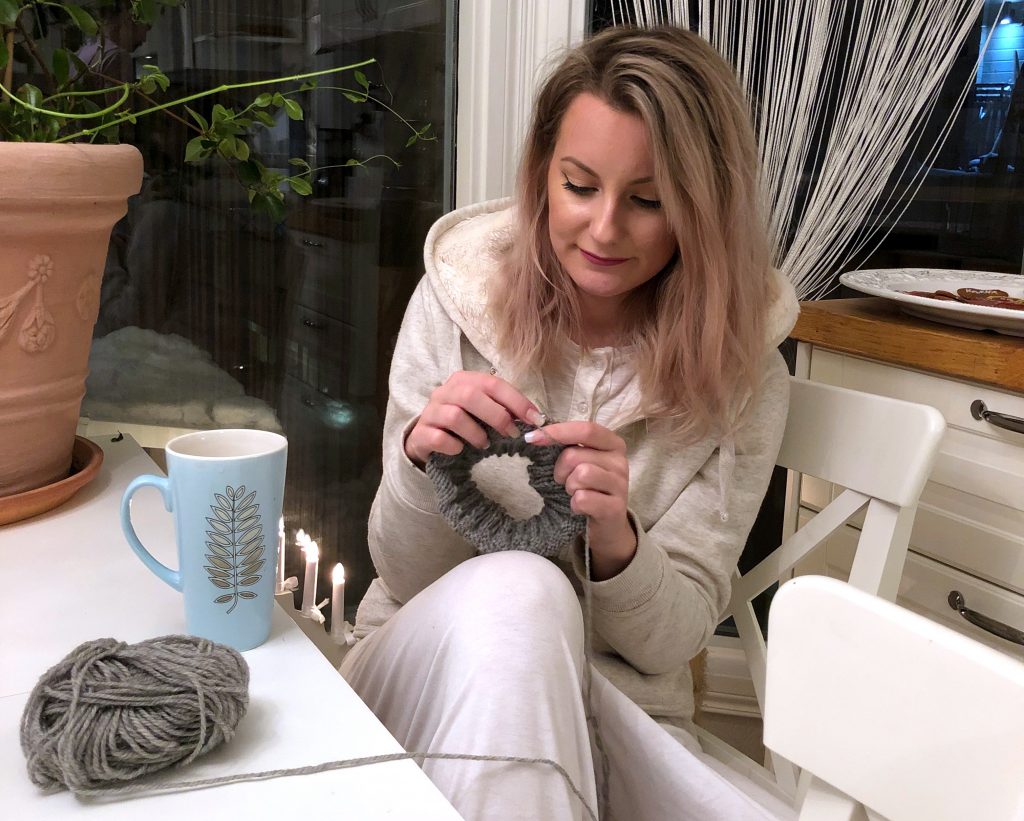 I'm not really stressed anymore, everything is done urgently, but after a hectic autumn with a lot internal stress so I am much more sensitive. As soon as I get a job-related message / call and a small problem or decision has to be made when I am free, I can not relax later, which means that I work in the brain even though I have to rest. And I can not have the phone on silent either because there may be urgent job calls that I have to take.

As a self-employed person, you can not expect to be free as much as your employees, but you still have to be a little free. But if you continue to work "in the brain" for 3 hours after a simple conversation of 2 minutes, you will never be free. It is important to rest when you rest or what to say;)

But knitting helps! I am doing a braid knitting where I have to count stitches and turns, which is good when I need to turn off the outside world completely. And one where it is only elastic knitting + stockinette stitch when I can talk or listen to podcasts at the same time but that the knitting itself is relaxing. Great! 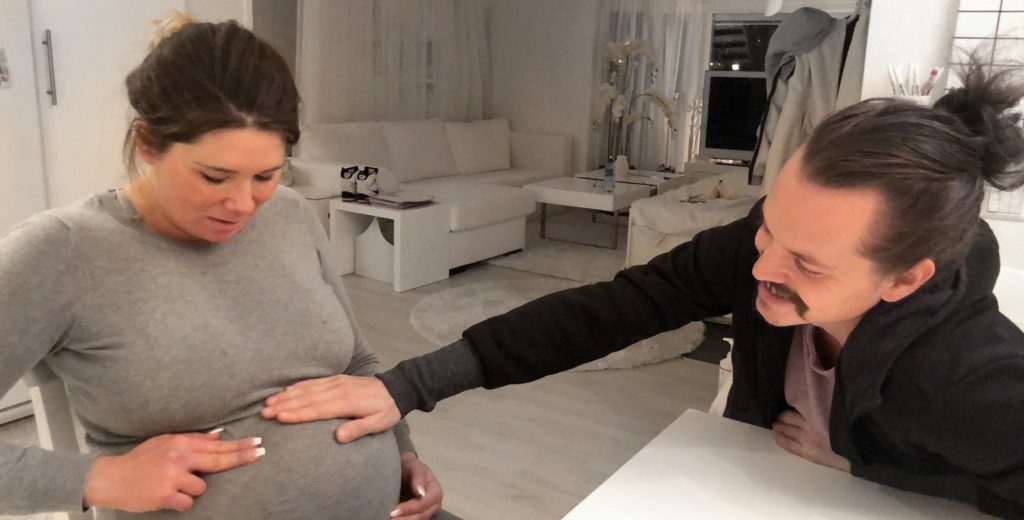 But today is Sunday and the day when Annika has always thought that the baby will come, she was expected on the 10th but has always said that Helmi will come on the 13th. So now we are free and in full swing if it will start!

Annika has had a little pain in the pelvis but it gets better when she wears heels (strangely enough) so now I have a picture that she will stand half naked in the delivery room in only heels, freshly fixed French manicure and completely made up with all permanent makeup tattoos haha! The midwives will think she's crazy :)

No, now I'll take out my knitting and be a little free. Hugs are! ♥