Threading - how does it work?

Hi Helena! I am interested in booking threading with Zahra, but do not have much control over how it works and what the difference in the result is compared to e.g. shaving or waxing. What do you look like right after, and the days after? Is there anything you need to think about? Hug!"

What fun that you want to book threading at the salon! Here is a post with lots of info that I hope answers all your questions and a little more :)

A hair removal method that removes the hair strands with the root and therefore gives a long-lasting result (unlike, for example, hair removal cream and shaving where the hair grows out after only a few days). You twist a thread and pull it in a special way over the skin so that all the straws follow, even small thin scabs. The method is several thousand years old and has been widely used in the Middle East and Asia. 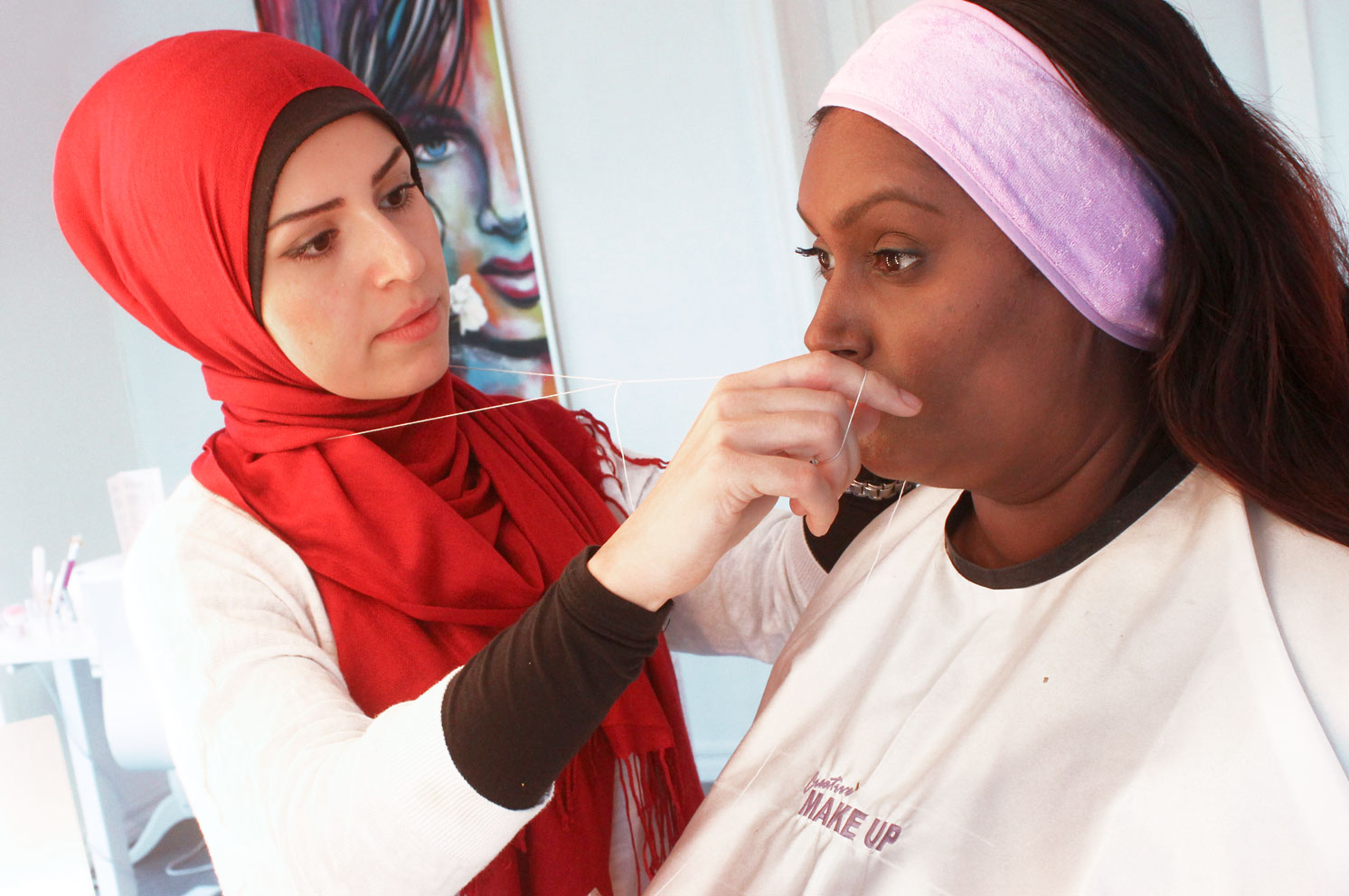 Why do you thread your face?

Some do it because they have coarser hair growth they want to get rid of, for example dark hair on the upper lip is extremely common even on women. But even people with lighter hair growth can have a lot of facial hair, which is often very long as well. Some people are bothered by the fact that it is visible, for example in sunlight, and some (including me) are bothered by the fact that the make-up does not apply as well in the areas where you have a lot of hair.

I have gotten quite long straws under the cheekbones that bother me, have felt a bit like fur haha even though others probably have not seen it at all. In addition, I would like to remove the scalp around the mouth, partly because I often put on make-up (and am tattooed) outside my actual lip contour, which means that I have straws on my lips otherwise, but also because when I take close-ups of lip make-up, I think the hairs are highlighted so much that it disturbs the images.

How much can you thread?

You can either thread small areas such as the upper lip, lower lip and chin, but you can also thread the entire face, neck and neck. At our salon, there are different price ranges depending on how large an area you want to thread, everything from threading mini to threading luxury! You can also thread the eyebrows, but with us we make the shape with tweezers and scissors and then thread around.

How does it happen? 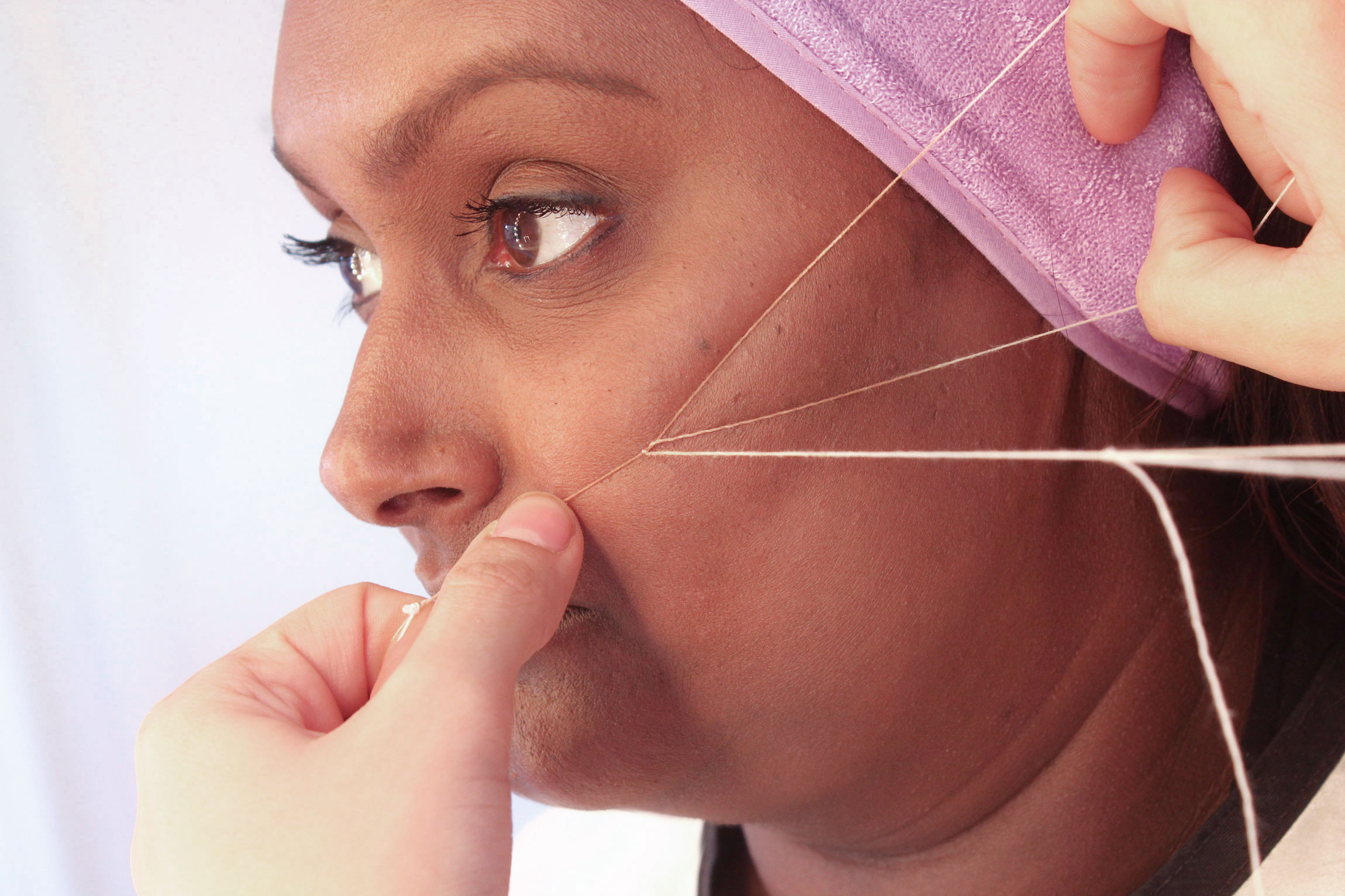 Everyone is differently sensitive, I personally thought it hurt the first features only (on the upper lip) and up on the cheekbones, but in the rest of the face it did not hurt at all. But it is probably common to think that it hurts, but I was pleasantly surprised :) If you have thicker straws, it probably feels much more.

The skin turns red when you thread, it is individual how much, some become very red others not much at all. The skin feels smoother than the baby and a little warm. It almost feels like you got a facelift!

The days after - In many people, the end result has been achieved as soon as the redness subsides, ie after only a few hours after the treatment. On sensitive skin, however, there may be small fin-like rashes, which disappear after 3-4 days. Also common if waxing. The soothing skin care after the treatment (which is included in the price with us) means that you have less risk of rash, or get milder rashes. It is also important to be careful with skin care at home the days after.

When we threaded my face I was so stressed that we did not clean at all before (I had already started to put on make-up) and I was in a hurry to continue working after so I did not smear myself at all but put on make-up over the redness and stressed around the rest of the day - which was a mistake as I now have quite a lot of rashes on the sides of the face. But it is not completely abnormal, especially not on Scandinavian skin, and in my opinion still worth it as it takes quite a long time before the hair comes back, but the rash is not there that long. I have googled around a lot and read that many only get this the first time / the first times, but then the skin gets used to it.

Note that these rashes do not have to do with acne skin, but rather because you have a sensitive skin. I have a super sensitive skin and get a rash when I wax my body too, so I was a little prepared for that :) 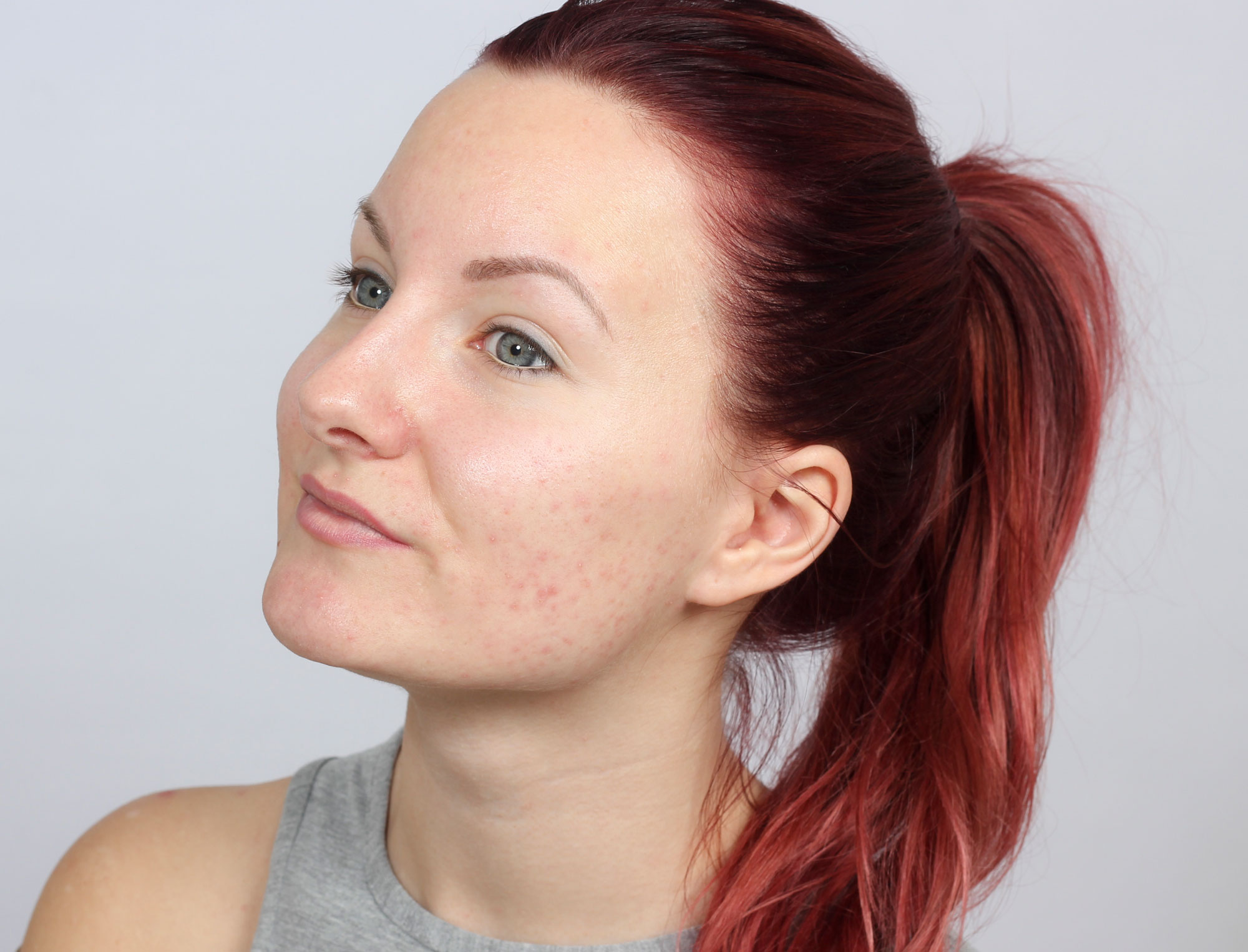 This is what I look like now, but do you know what's sick about it? I kind of like it haha, I do not know what it feels like but when I smeared it with soothing creams today I kind of felt like I liked it. It must be because I had so much acne in my teens that it feels a little nostalgic ?? Or do I have a psychologist reader who has a good answer? :)

What is the difference in the result with threading compared to other methods?

Methods such as shaving and cream are not as durable as the hair is only removed on the top of the skin, then it grows out after just a few days. In addition, shaving gives a stubby feeling when it grows out, because you cut off the thin top of the straws.

And compared to waxing, threading is much more gentle, waxing pulls a little in the skin as well and takes large portions at the same time, which can lead to, for example, ruptured blood vessels.

How long does it last?

It is different how fast the hair grows, for about 3 weeks most people are completely hairless but in some it takes even longer. I have only threaded once, so I can not answer how long it lasts for me, but the hair on the face usually does not grow as fast as e.g. the eyebrows. If you thread regularly, the hair growth decreases, and then you do not need to thread often at all.

Can you get coarser hair growth from threading?

Threading does not stimulate the hair follicles and should not cause the strands to become coarser, then the method would probably not have been used for thousands of years :) As I said, on the contrary, hair growth can decrease if you thread regularly for a long time.

Is it bad for the skin to thread?

No not at all! It triggers blood circulation in the skin and removes dead skin cells, a bit like an exfoliation. Many people do it as a facial even if the hair does not disturb them, a bit like microneedling :)

Then if the skin continues to get a rash, I actually do not know if maybe you should stop threading? I'm very sure that the skin gets used to it, as when you pick the eyebrows most people do, but otherwise you might not have to stress it out unnecessarily if it happens every time for a long time, a little unsure of that question I have to say. Anyone else know? 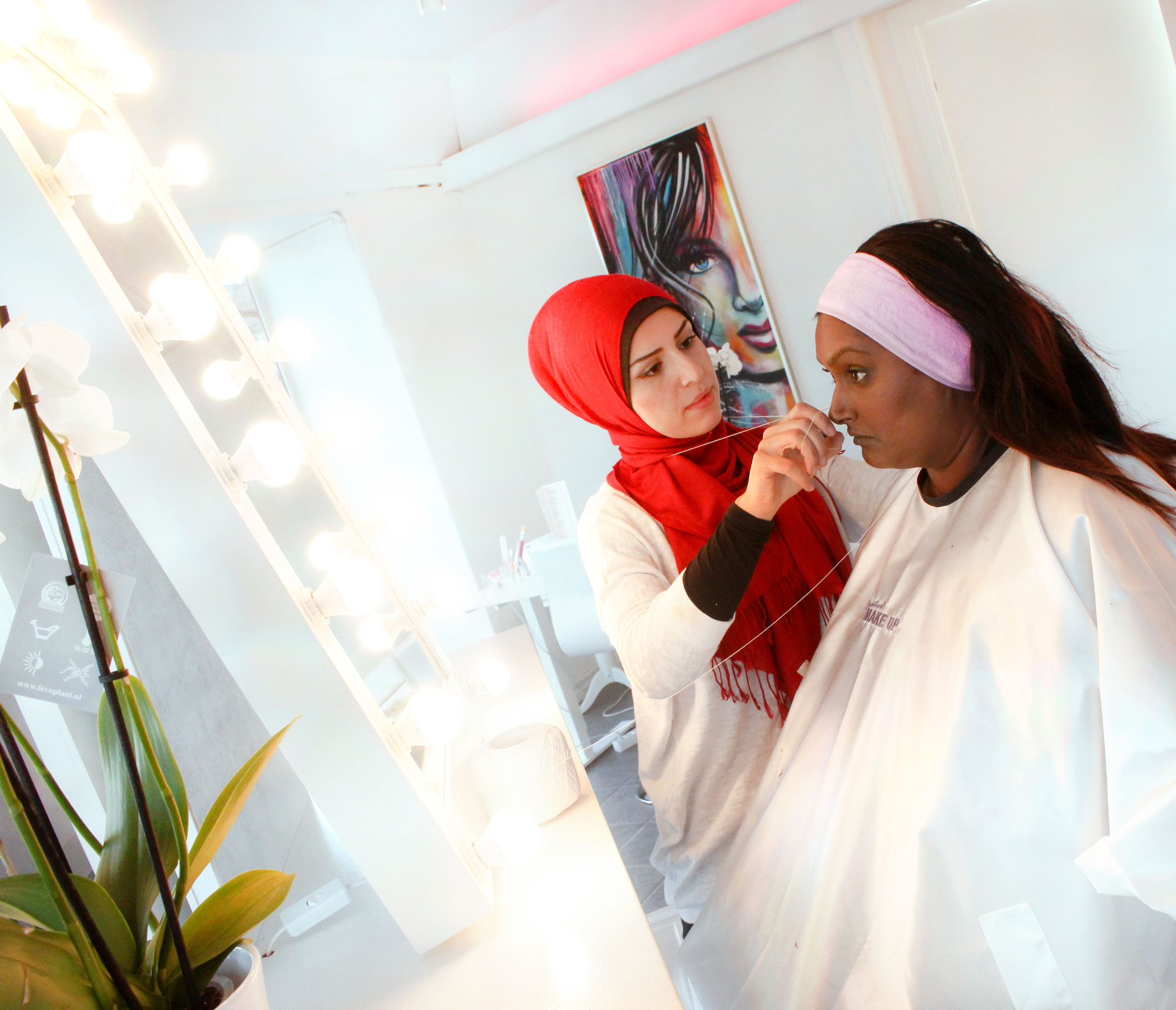 Now I think I have included all the info on the subject! You who read who have threaded / threads regularly, you are very welcome to come with a response as well :) And if you have any more questions, shout out!

Zahra worked with us on Mondays and Tuesdays and you can book her here.

Also read: Been sick? Make up yourself briskly again