Different Methods For Tattooed Eyebrows - What Is The Difference?

In this post, I go through the different methods for tattooed eyebrows.

When I was a partner in the salon Creative Makeup, we were regularly asked what is the difference between microblading, machine tattooing and 3D eyebrows. There are several different techniques and brands today and many concepts that are difficult to know what they mean.

What is the difference in everything? Today I thought I would sort out the concepts! :)

”What is the difference between the method you do and 3D eyebrows, and which will look best?Is a very common question at our salon. But 3D is not a method, 3D is a result. Everyone who does hair technology gets a 3D result, then whether it is nice or not depends on who gets the tattoo and exactly how he places all the hair and has an eye to see which shape and size fits the person's face.

In the past, eyebrows were tattooed as a completely filled "cake". Later came the so-called. the hair strand technique, where small strands were tattooed instead to get a more natural result and a more three-dimensional effect. A few years later, someone came up with the concept of 3D eyebrows and started launching it as a "completely new method".

A bit like a lash lift :) Before, we always said eyelash permanent and it was not a very common treatment. Then came the concept of lash lift and then became new and trendy. Sometimes treatments need a little "new branding" which is fun I think :)

What are the different methods for tattooed eyebrows?

The method is determined by which tool you use, ie if you tattoo with a machine or manually. Machine tattooing is the most common nowadays, as it is safer and more effective. In body tattooing, the bamboo method is best known of the manual variants. There you attach needles to a bamboo stick and tap in the paint by hand. In poorer countries, manual tattooing methods are much more common than in Sweden.

The most well-known manual method for cosmetic tattooing is Microblading. There you use several needles that sit close together on a long row, which makes it look much like a scalpel. You attach the needle (knife) to a special pencil and then carve / cut lines (hairs) into the skin. There are also manual methods / tools where instead of a needle row you cut with a real knife blade, eg Diamond blading.

You can thus make 3D eyebrows with either a machine, microblading, knife blade or tapping with a bamboo stick. The tool is less important, the most important thing to keep in mind is who performing the treatment.

Creative Makeup, which I was a partner in before using a machine, and Annika, who founded Creative Makeup, have many years of experience in permanent makeup (since 2006).

3D eyebrows have as many styles and looks as there are practitioners. When Annika went to her education, she had to learn a special pattern for how the hairs should be. Of course, it looked better than the previously completely filled cake, but there are few people who have hair growth "according to the template", which could still make it look unnatural. Therefore, she has improved the 3D eyebrows more and more and has developed her own way of placing the straws for as natural and beautiful a result as possible, and exactly how the straws are applied is adapted to the customer's own eyebrows.

The needle goes up and down and presses the pigment into the skin while drawing the line. So it is the needle that does the job, and you do not have to press very hard for the paint to adhere. Both printing and color feeding are smoother and more precise with a machine, and with the right anesthetic it is virtually painless.

There are several different types of needles. In addition to single needles, there are also needles where several needles sit together in bundles in different ways.

In body tattooing, people often talk about different line needles and shadow needles. The needles can either sit close together next to each other in a row (as in microblading), in a round or oblong shape with different densities.

For permanent makeup, there are usually up to 9, but in body tattooing I have seen that there are up to 36 needles in the same.

When microblading, you cut lines in the skin and add extra color afterwards so it can sink into the cut.

Many customers say that it hurts more than a machine because the "knife" is actually a row of needles and therefore more like a saw. It becomes more like splitting the skin (now we are talking at the microscope level). In terms of results, the biggest difference is that machine tattoos last longer while microblading disappears faster - whether it is an advantage or a disadvantage depends on what the customer wants.

The advantage of microblading is that it means a lower start-up cost for new practitioners, as they do not have to invest in an expensive machine. Perfect for increasing the number of rogue practitioners in the industry. Do not be fooled by a cheap price!

But of course there are also many skilled tattoo artists who use microblading and get nice results and satisfied customers! :)

Other concepts and different methods for tattooed eyebrows

Powder brows is also a "new-old" thing and it is simply that you tattoo like a cake but a little more transparent. A bit like a shadow, you might say. You can also mix powder brows and hair strand technique, that you do a light shading on the entire brow and then darker hairs on it. Does not get so natural though.

Ombré brows is more of a make-up method but which is also starting to creep into the tattoo world, often when talking about powder brows. It is simply that you make lighter in the inner edge and darker in the outer edge of the brow, which partly makes the inner edge softer which is nice but there is also more balance in the brow because the outer edge is narrower so it can sometimes be felt lighter. Annika usually does this with her tattoo method.

Taffy is not a method but a specific brand for microblading that also has its own training. So everyone who does this is trained in the brand and uses the same colors.

There are new concepts and methods all the time. The most common is that each brand has its own colors and its own "method" that they teach. Which can confuse consumers as it becomes a jungle of concepts :) 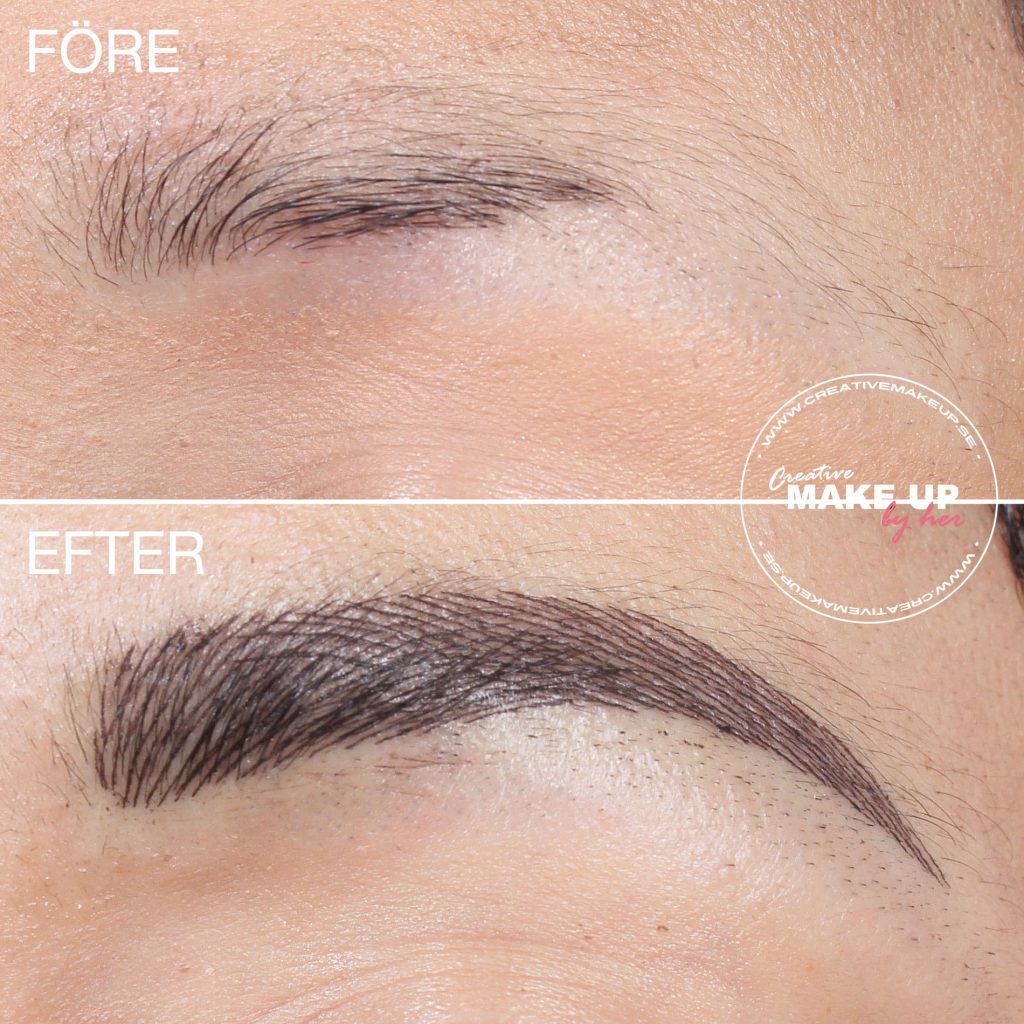 An eyebrow customer that Annika tattooed. 3D eyebrows with machine.

I hope that you who have thought about this got a little more clarity in the different methods for tattooed eyebrows that exist. :)

Remember that the most important thing is always to go to a person who is artistic and meticulous, just because you use a specific brand or hyped method does not mean that you can make a nice shape that fits your face or symmetrical eyebrows.

I am no longer a partner in Creative Makeup but you can book an appointment online Creativemakeup.se and contact them with any questions :)

Tattooed eyebrows - the time of healing

My lip tattoo - To tattoo the lips