This has been a fun and intense week! It is noticeable that it is starting to be summer with high pressure at the salon and a lot going on :) 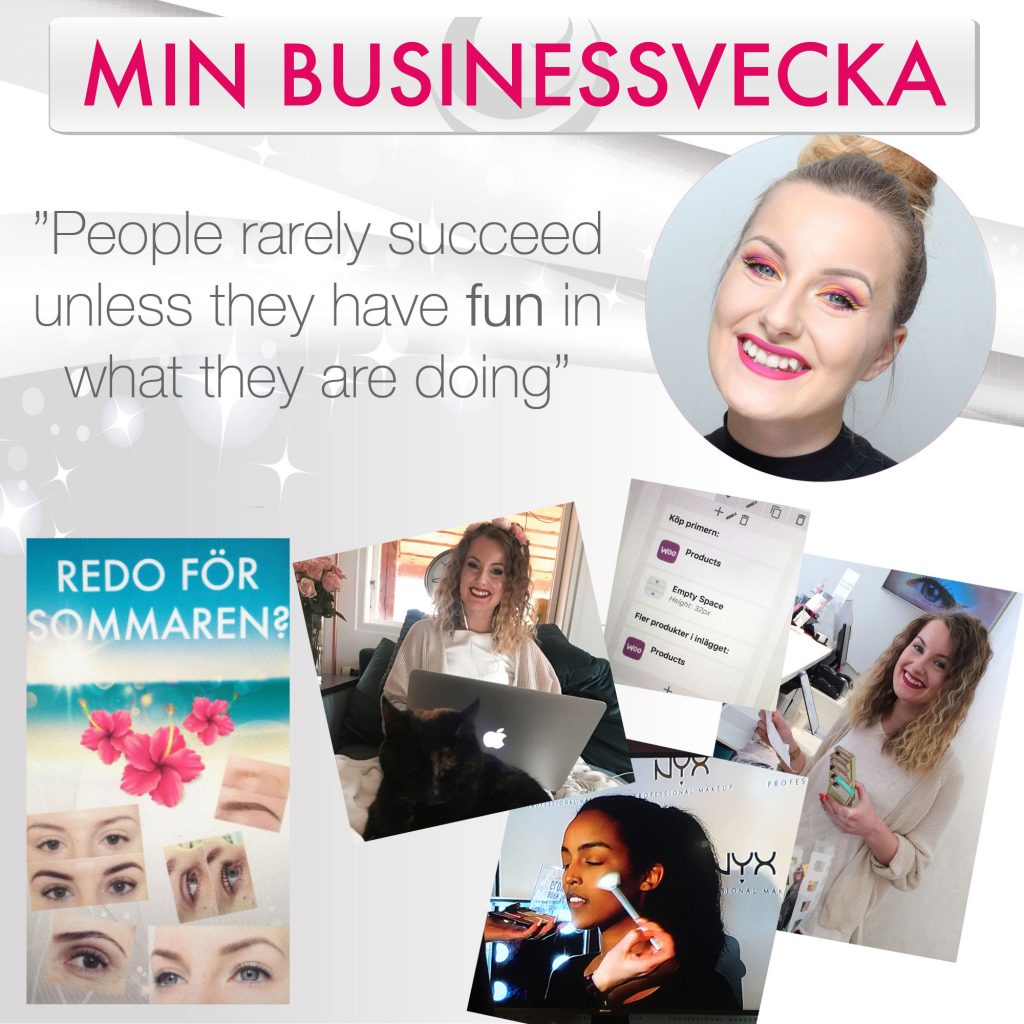 Creative Monday!
Normally, all my days usually have varied tasks, but on Monday I basically only did creative work! Among other things, I designed the campaign photos for May because Malin is in Cyprus, so I will take almost all the campaign photos this month. I will publish them tomorrow :) 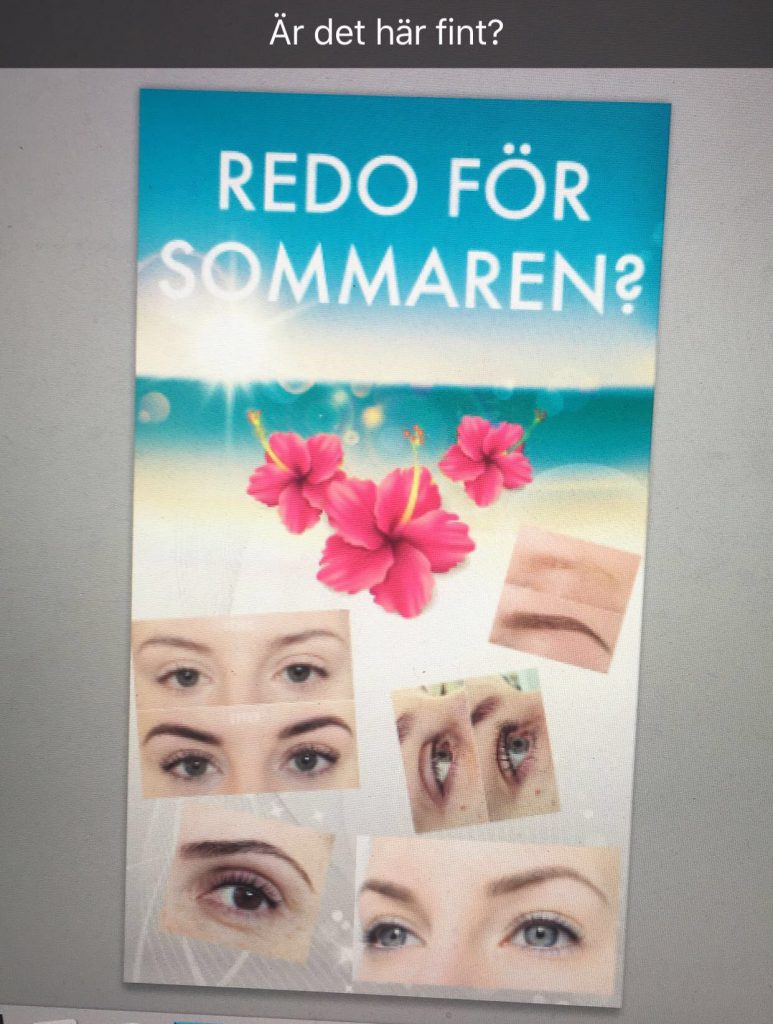 My classic question on snapchat - sends to everyone and asks for a response when I get unsure. By the way, I made this one quite a bit later, so this was not the finished result at all. You should not stop until you are satisfied! :)

Stress brain but still not stressed?
I have dreamed a lot of stress dreams this week, that I am in a hurry, everything is in trouble, people are in the way, when you start approaching you are suddenly very far away again, you know that kind of dreams. So hard!

In addition, I made a classic stress brain mistake on Tuesday. I worked at the salon and then went to Sthlm with the 16.48 train. When it's half past three, I realize how fast time has passed and stress away. Buy a ticket and just catch the train. The same second that the train started to roll, Miska writes "Did you go earlier?" and I then realize that the time is only 15.48. Gaaah. 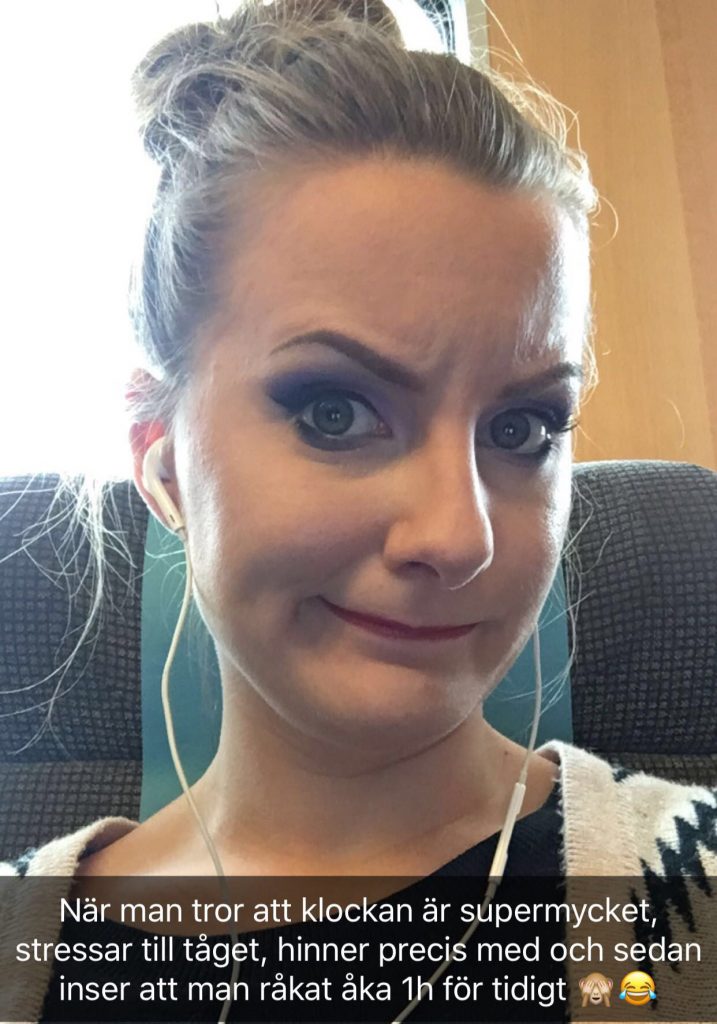 But I worked on the train and then I sat down in a café and continued working there. So it was not the whole world :) 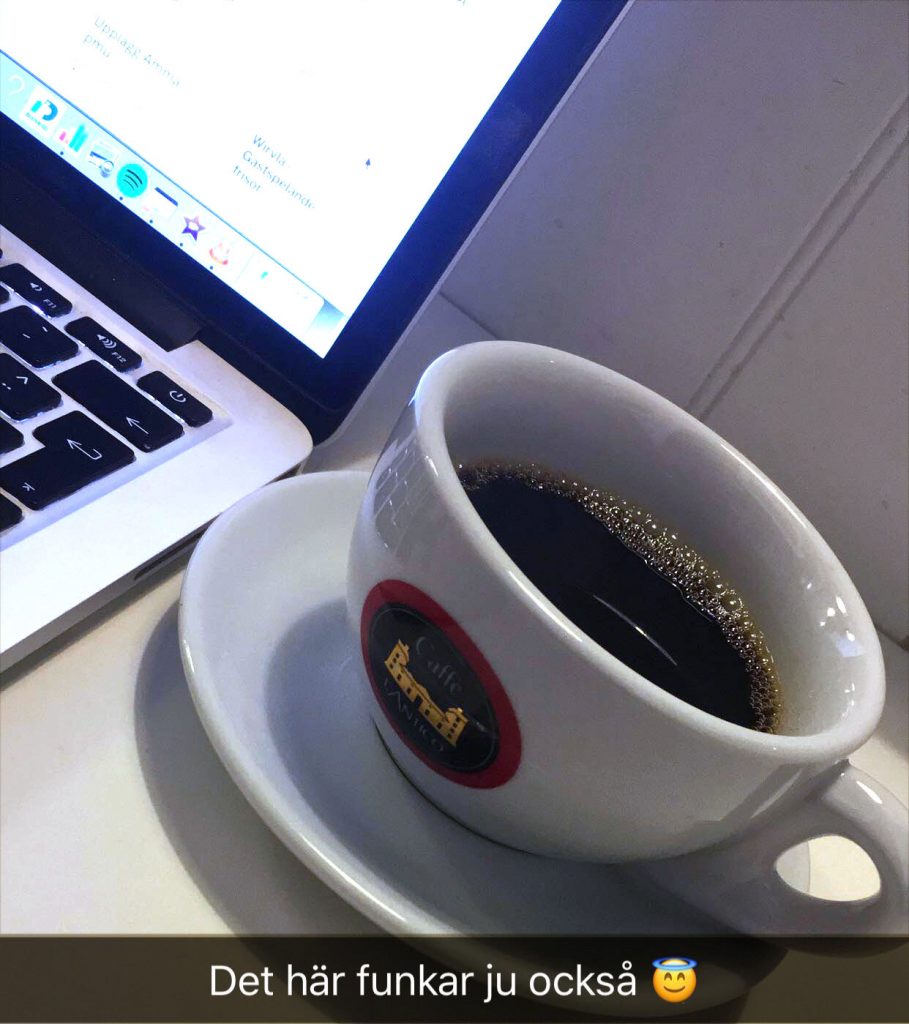 But the strange thing is that I'm not stressed, yes no more than usual in any case. I can feel a little impatient because I want things to happen now and now, but that's the opposite of stressed, right? :) I am also rested because I had a fever last Sunday so I took it easy all Sunday and kind of just lay in bed. Meen it goes well over! :)

Masterclass with NYX
In Stockholm I was at a Master Class & launch event with NYX there Evelina Forsell made a glittery makeup demo and NYX showed off some of its product news. When they said "some of the news", I thought "why do not you all show?" but then he said "we will launch around 200 new products this spring!" whaaat, so many !! But then it is with all the different shades as well, but still :) 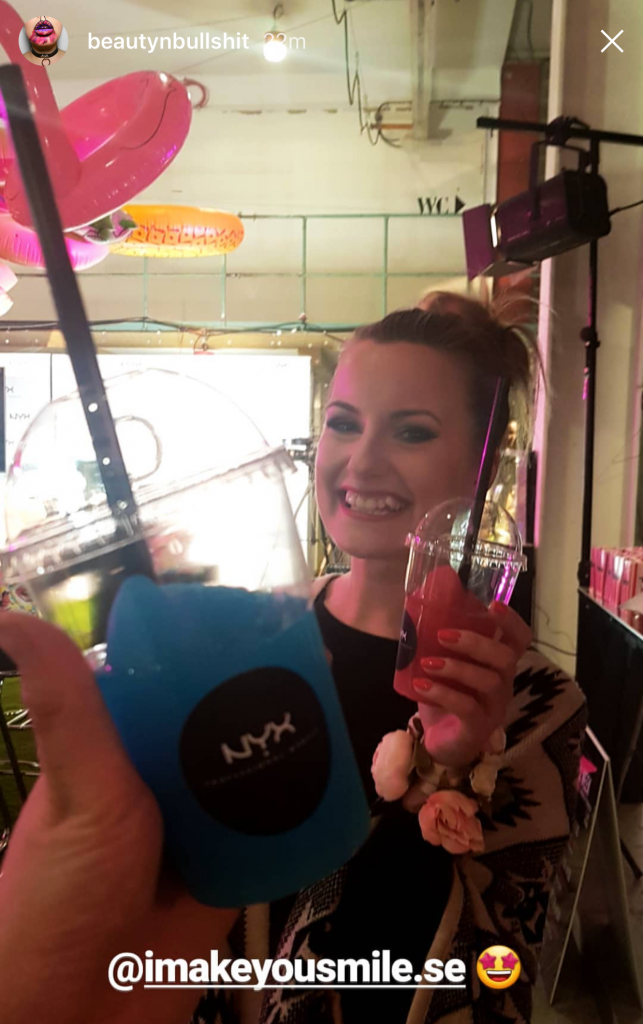 This screen print I screened from Camilla Söderlund's Insta Story @beautyandbullshit which she posted from the evening!

NYX offered slush, popcorn, cotton candy, nachos and lots of goodies! And then you got to squeeze in and feel the news of course, the higlights and the new vinyl eyeliner are really gaaalet nice! 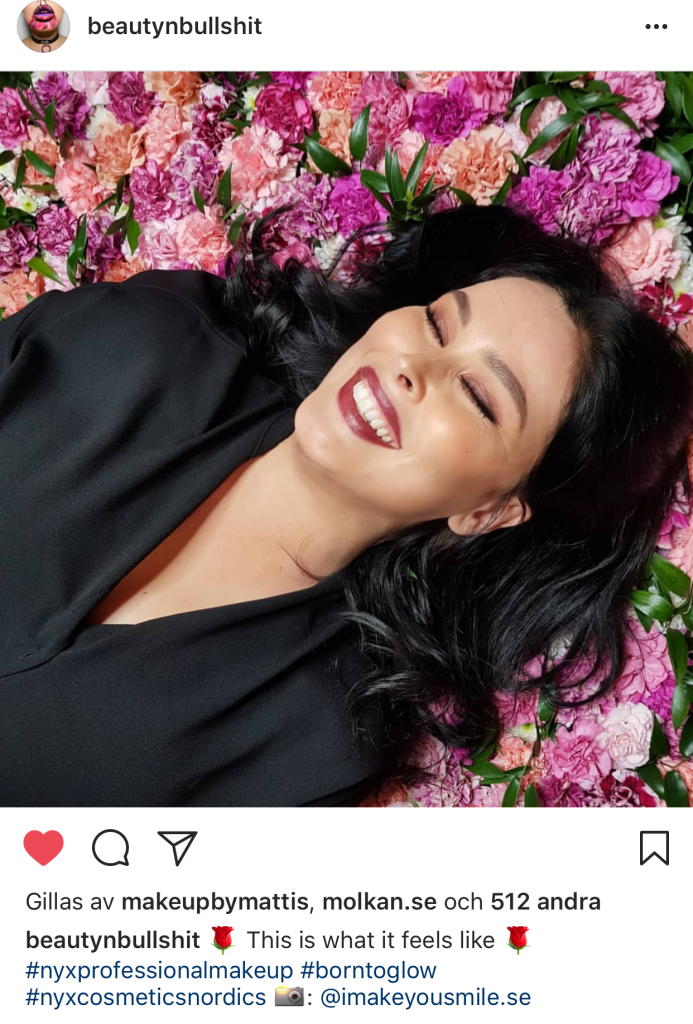 There was also a floral background on the floor with good lighting and everything, so influencer-friendly;) This super nice picture I took of Camilla! She is so easily photographed (I wrote light-footed first but when I checked-read I realized that it can be read a little wrong haha).

I myself would never be able to just lie on my back, laugh and have such a flawless appearance. We took about 6-7 pictures and then she had many nice ones to choose from, such a good model !!

Another had looked incredibly misplaced among the flowers with sloppy hair knot, cardigan and then probably a completely insane smile considering how difficult it is to look relaxed when lying on your back haha!

Evelina made up with both news and her own favorites and made nice glitter eyes on her model!

I got lots of fun things in the goodie bag that I will show you soon, including NYX Glitter Primer which I have been craving for a long time as I want to be able to get glitter lips that are not only nice but comfortable as well. They have done that at all other Master Class events with NYX :)

It was completely crowded on the train home and I could not stop myself from starting to look, read and feel all the products! I tried to keep most things in my lap due to male team but then I thought uhh and used the table that I was actually lucky enough to sit at. NYX got some free advertising if you say so! :)

High pressure in the schedule at the salon
Our high season at the salon is definitely underway! :) And just this week it has been a little extra intense as we have had an unusual amount of bookings and cancellations and also unusually many customers who arrived late in their times. One moment the schedule is full, the second after there are a lot of green gaps and then suddenly it is completely full again haha.

In most cases, it is not the whole world if a customer arrives late because we have quite long times on our bookings. But now there have been as many as I like and then I have sometimes had to jump in and help so that we can get it together. No carelessness fixes a customer just because you have some time, but then it is better to e.g. I jump in and do the fringe color at the end.

But we are a good team so it has gone very well! And it is a very positive problem to have a lot of work;) We have the luxury of having 4 fully booked makeup artists with a 95% occupancy rate in April! Occupancy rate is thus how much of the working time you are booked with customers, and 95% is sick good! 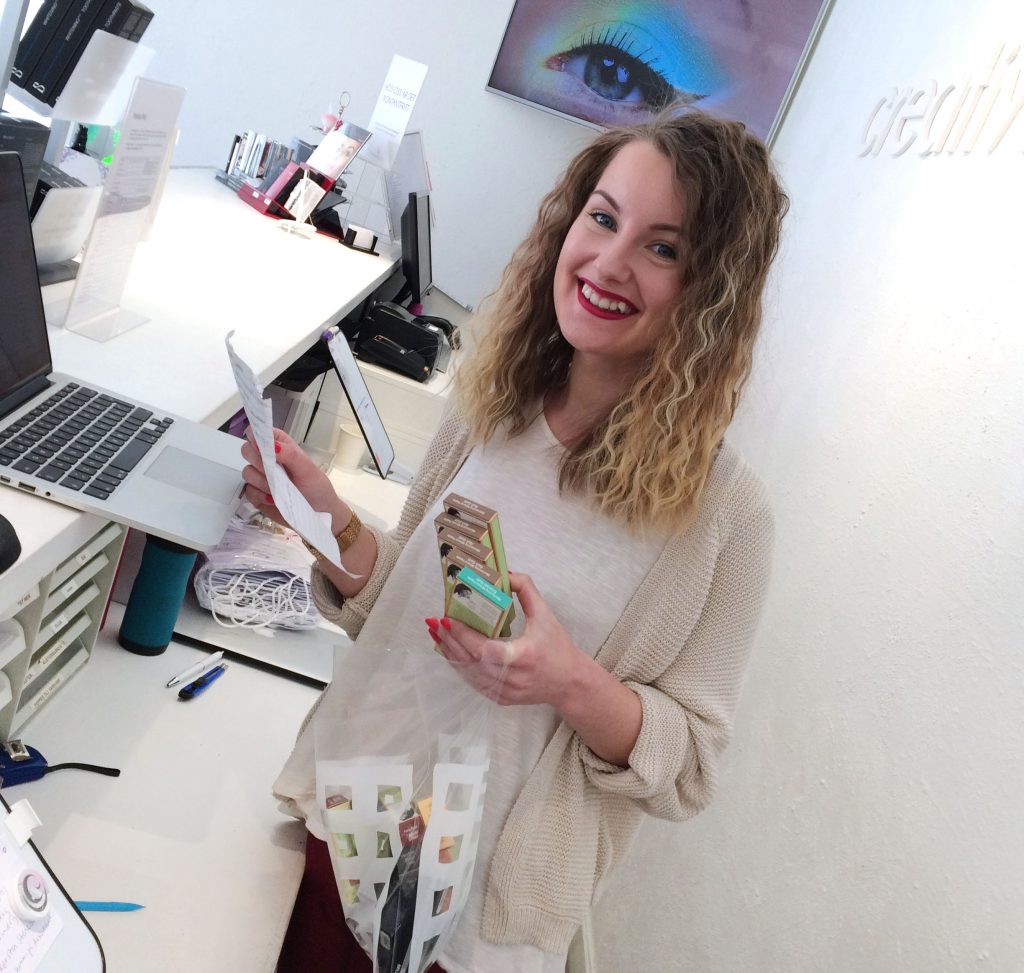 Here I am behind the checkout counter that is busy with products that we will have in the goodie bags at our summer event on 31 May!

News and photo jobs at home in the studio
The photo studio has been used extensively this week, I have taken step-by-step make-up every morning and also taken pictures of our fantastic novelty glo Skin Beauty Tinted Primer which is a colored face primer with SPF 30! You can read more about it in this post.

I'm really starting to be happy with the webshop now, it is constantly being filled with beauty guide posts and the majority of all products have related posts such as "make-up with the shade Rumor" "See step by step" or videos. I think this is so fun! 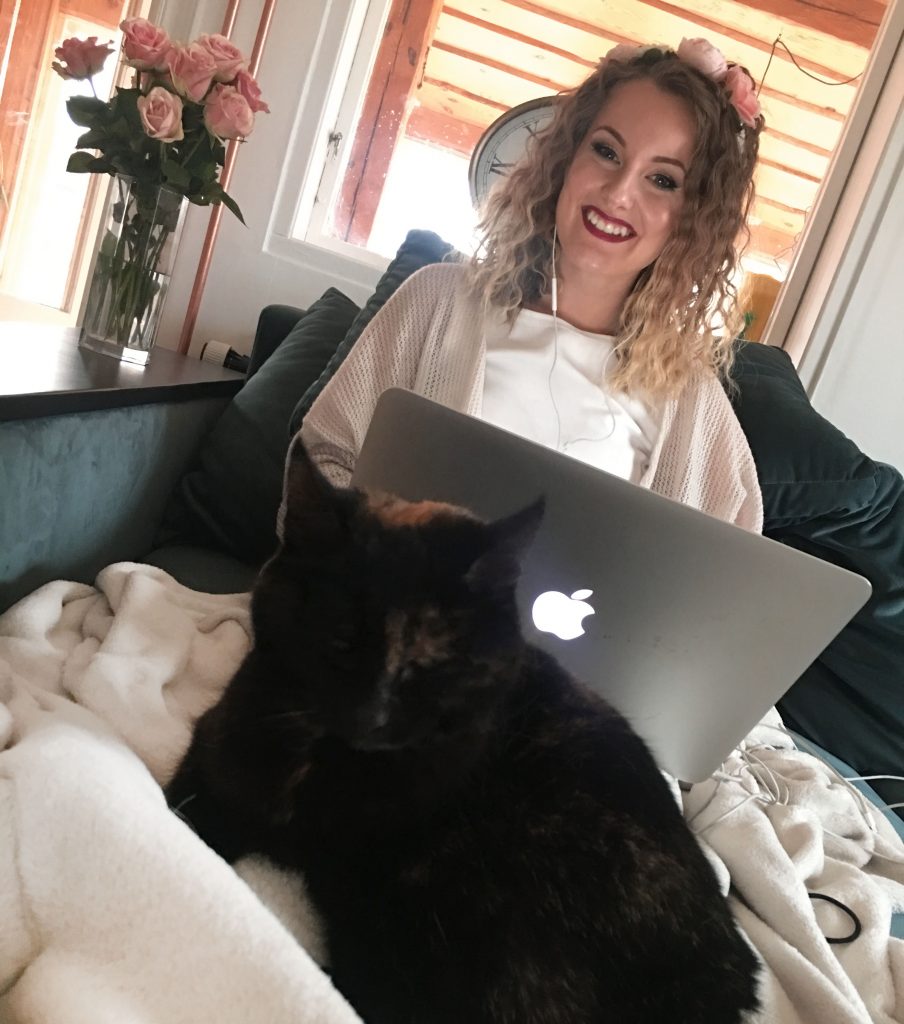 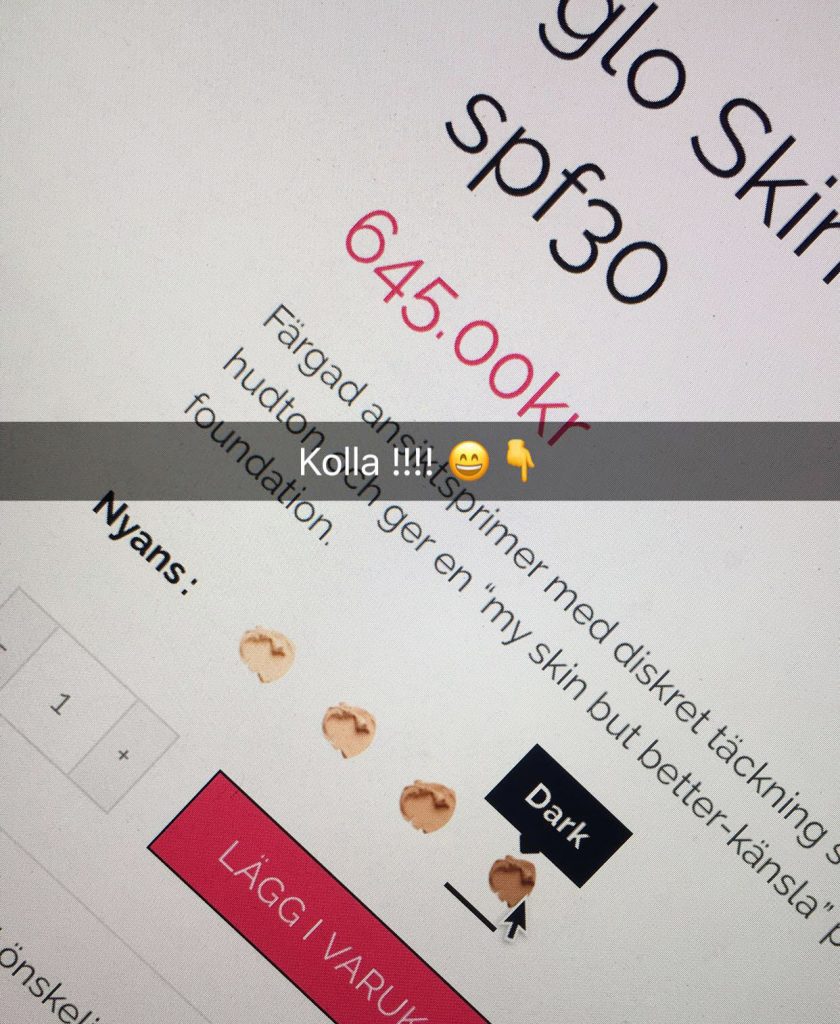 Sometimes you get excited about the little things! We make updates in the webshop regularly and now I fixed so that all the shades (when choosing which one to put in the shopping cart) are small cute pictures instead of a regular list!

I will only have this on products with few shades where it becomes clear, on type Pressed Base which has 20 shades it is easier with a list :)

It has taken me quite a long time to get into how the webshop works, we have it much easier to build than you can ha but how to build a page and what it looks like "live" then are two completely different things.

A small detail on the edge of the whole page can e.g. look like this: 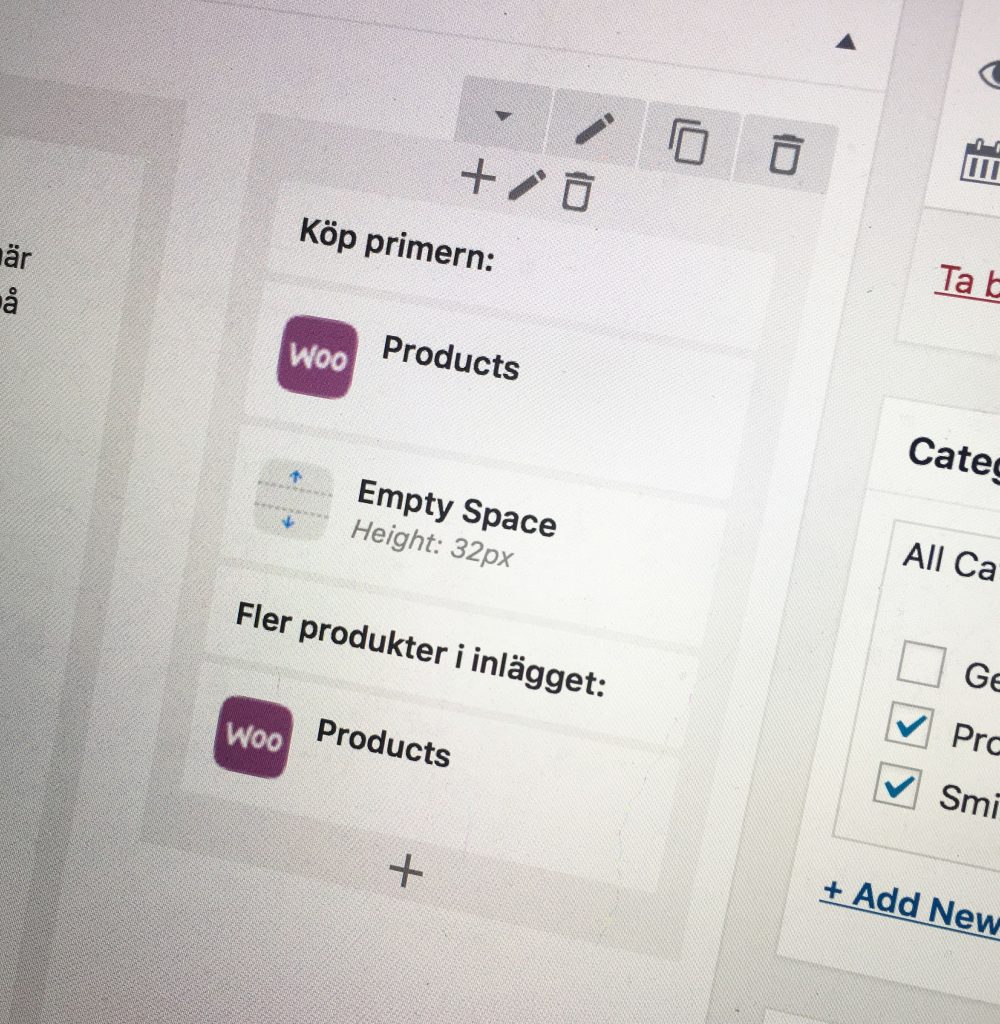 Each box contains a lot of details that you can change if you press them, e.g. under "products" I have chosen different linked products that should be visible on the page, in how many columns, etc. The box "Empty Space" is only there to create more distance between the things. So it's not rocket science but also not completely uncomplicated :)

Now I will collect some vitamin D and stuff in the garden, so I have recharged my energy account for next week :) I feel that next week will be a real power week!