It is a transparent liquid that you brush on along the French edge every night.

It is also interesting to know that it was produced by one Doctor who wanted to help cancer patients get their hair growth back! 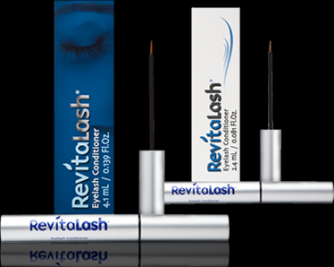 I have not tested Revitalash myself, instead I thought to tell what Annika at Creative Make up likes the product!

Annika chose to just treat one eye first, to really see the difference. She then chose the right eye, because she had shorter and sparser lashes there since before.
She saw results after 10 weeks (It should take 2-10 weeks according to the product description)
”It started with the lashes on the outer edge getting longer. After a while, everyone noticed a difference! Then I thought that the lashes on my previous "best" lash eye looked very pitiful. There were even people who asked if I had made up ONE eye! ”

14 weeks after Revitalash
(Now the lashes became almost too long, when they hit the glasses)
I've also heard that Neulash also works well (My sister Mia has tested both Neulash and Revita, and thinks the effect on both is similar) Have heard that Neulash is stronger and seems a little faster. But as it is stronger, there is also a greater risk of reactions.
And Annika had heard about people who had started "peel" a little in the French edge and that it has become irritated. However, this is not a reliable source.

Revitalash costs SEK 1295 or SEK 795, depending on the size of the bottle. It sounds expensive, but the product is very rich. The large one lasts for about 6 months if you use it daily (about 25 weeks)

And once the lashes have grown, you do not need to brush every day, that is enough a few times a week. And then of course it lasts even longer!