Make up the lower lash line

Sara sa…
“What a look !!! Just a question, I find it difficult to get the shadow or eyeliner looking good on the lower lash line, even though I use primer. I think it may have something to do with the fact that I am above as well, but I think I look so tired and after a few hours at dinner or a party, I think I look very worn. So do you have any tips and tricks on how to get it extra nice and how to think in the beginning when you are above? :) Hugs! ”

This is a very common question, so I'll take it in a post! :)

1. I never blur the eyeliner on the lower lash line, only if I'm looking for a smoky look. However, I can sometimes fix the eyeliner with eye shadow, which I then blur a little so as not to get a very marked result.

2. In addition, I do not draw a "straight line" at once, but work out a selection with small, light movements. Takes a little at a time until I am satisfied!

3. It is always easier if you have a well-sharpened pencil. Pointed, without being in the sharp direction.

4. My most important tip if you want it to look natural, is to apply just where the lashes are stuck. I usually put a little wider in the outer edges, but as soon as the black comes under the lash roots themselves, it looks more "made up".

5. I rarely put the eyeliner all the way to the corner of my eye, but stop a bit before.

6. The easiest way to proceed also depends a bit on which eyeliner you use. Some give strong color immediately, while you have to work a little more with others. What you like is entirely a matter of taste :)

7. If you think it's nice with a lot of eye shadow under the eye, but feel that it will be too much or not quite right on its own, it can depend on the shape. I think it's shitty nice to apply a little wider with the eye shadow right in the middle of the lower lash line, and thin inside and out. Then you get a nice and open shape on the eye, while still putting a lot of eye shadow. 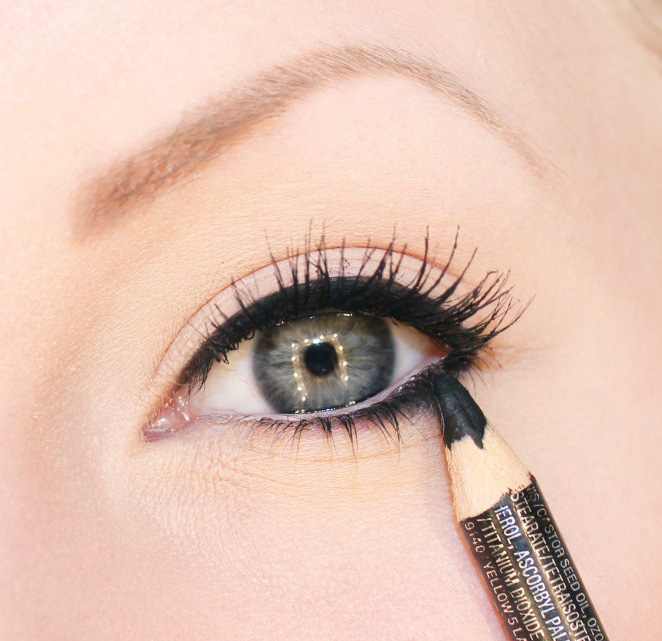 In this form, I usually put the eyeliner pen, quite a lot in the outer edges and then just right at the bottom of the lashes further in.

That the make-up "goes down" a little during the day so that you look tired, despite primer and good products, can be due to many things. For example, it is very easy to happen to take too much primer just on the lower lash line because it is such a small area, and if you do not saturate it with eye shadow, it can have the opposite effect.

Hope you are happy with the answer and feel a little wiser!